The Vittoria Choir continually eschews the beaten path to explore new artistic horizons – from collaborating with the Puy du Fou historical theme park, to recording a film score, to performing Carmina Burana by Carl Orff at the Palais des Congrès convention centre together with the National Ballet of China.

Dance often features heavily in the Choir’s productions. To celebrate the launch of its CD recording of MisaTango by Martín Palmeri (2017, Hortus) – a joyful mass with Latin-American rhythms and melodies recorded with the Pasdeloup Orchestra – the Vittoria Choir decided to call on two Argentine dancers. A chance encounter with contemporary choreographer Julien Lestel led to the conception of a true spectacle of music and dance, entitled MisaTango – Messe en mouvement (A mass in motion) performed at the Opéra de Massy in March 2018.

The Choir also joined forces with an equestrian theatre company run by famed horse trainer Bartabas to collaborate on Mozart’s Requiem. The original performance, initiated in 2017 as part of the Mozart Week festival in Salzburg, was brought to new musical heights with the Vittoria Choir at the Grande halle de La Villette in May 2018, with riders and horses from the Equestrian Academy of Versailles taking part in a masterful ballet to the rhythm of Czerny’s 19th-century arrangement for choir and four-hand piano. The result was a magnificent liturgy of choral voices combined with the grace and power of these majestic animals. 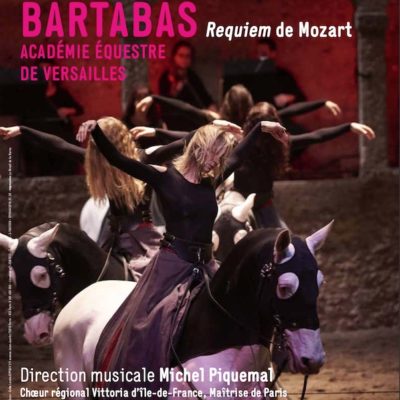 This version of Mozart’s Requiem is put in the saddle by Bartabas with the Equestrian Academy of Versailles and the Vittoria Choir.

Sacré Rossini a Radio Classique event to rediscover the most beautiful tunes of the master of the opera-bouffe by the stars of today and tomorrow!

The concert on Tuesday, June 26 were broadcast live on Radio Classique.

Through a collaboration with the Compagnie Julien Lestel at the Opéra de Massy (91), the Choir expands the field of MisaTango with dance.